ACTIVITY is so often associated with mere physical motion that one may find it somewhat hard at first to grasp the idea in Christian Science of true activity, which has in it no element of materiality. True activity belongs to divine Mind, God. In the first chapter of Genesis we are told that man was created in the image and likeness of God, and given dominion over all things. This was the real, spiritual man, God's beloved son, "the climax of creation," as Mrs. Eddy says in "No and Yes" (p. 17). Then she continues, "And God is not without an ever-present witness, testifying of Himself." She further states, "In Science there is no fallen state of being; for therein is no inverted image of God, no escape from the focal radiation of the infinite."

Human obedience is possible in proportion to our understanding of divine Principle, and our ability in consequence to distinguish between right and wrong motives. Perfect obedience is the reflection of perfect Principle. A reflection is the most obedient thing in the universe, because it has no power of initiative of its own. It is absolutely dependent for movement on the cause of its existence. Then, if man is the image or reflection of God, he can act through no impulse or initiative of his own, but must be absolutely obedient to Principle, the Mind which created him, the Mind which is eternally active, the Mind which brought forth all the harmonious wonders of creation, the Mind which knows no inefficiency, no inharmony, no lack or limitation, no competition or opposition, and no weariness. When we grasp, even faintly, the infinite, indestructible energy of divine Mind's activity, we see that man, reflecting that power, has dominion over all things, and that no material law, so called, can oppose, hinder, or stop man's God-given activity.

Send a comment to the editors
NEXT IN THIS ISSUE
Article
What Do We Lack? 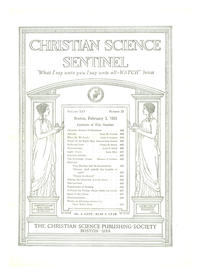