The Time for Thinkers

RIGHT thinking has generally been considered of much importance. Men, however, as a whole have not realized how necessary correct thinking is to the right advancement of the individual as well as of the world. To be sure, they have often acknowledged that the best thinkers in any community have been its most valuable members, but this has not been a sufficient incentive to spur others on to like mental activity. Because it has been so largely believed that thinking originates with persons, both personal pride and personal depreciation have tended to hinder mankind from accepting and proving that the ability to think is a universal privilege and possibility,—yes, and also a final necessity.

While Christian people have accepted Jesus' teachings as the right standard for all action, they have frequently failed to see in how large a degree true thinking has been directly concerned therewith. Indeed, they have too often felt that if acts were properly controlled, it made little difference what the thoughts might be. Even when men recognized the importance of thinking, they did not seem to understand how to divide between right and wrong thoughts. Many have been the deceivers and the deceived because no invariable standard was accepted whereby it could be decided as to which thoughts were true and which were false. To-day we still have the questions: How are we to become thinkers? How and what shall we think? How are we to divide between right and wrong thinking? 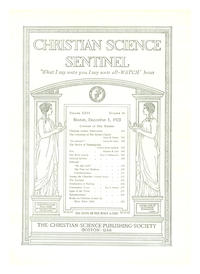