Willingness to Accept the Truth

CHRISTIAN SCIENCE is doing much to reveal the vital truth to be found in the Scriptures. The writer is especially grateful for the illumination which came in the recent study of the familiar story of Jesus walking on the sea to his disciples. We are told that when the sea rose and a great wind blew about them in their little boat, they were frightened until they beheld the Master walking toward them on the water and admonishing them not to be afraid. "It is I," he said. "Then they willingly received him into the ship: and immediately the ship was at the land whither they went." So it is with us when we seem to be engulfed in a sea of error; when our mortal sense is too frightened to recognize Christ, Truth, walking directly to our ship. Then is when we should stand still and remember that it is only when the disciple is willing to receive the truth that the waves and discords of material sense are stilled and the demonstration made.

The healing of any problem is assured when we unreservedly admit the Christ, Truth, and trust the situation to God, good. This truth has been proved in the handling of a Sunday school situation. The error of indifference seemed to be manifested in a class of girls of about ten years of age. In spite of faithful and prayerful work on the part of the teacher the error did not yield but rather grew until the teacher was mesmerized by the condition. All through the weeks she carried the problem about with her until the thought of indifference seemed so real that she became overwhelmed by its apparent growth. One by one the pupils began to be absent, until at last there was only one who came regularly. Then one day she remarked almost in despair to another worker in the Sunday school, "What is the matter with the children in my class?" The answer came: "Nothing is the matter with them. God knows better what to do with them than you, you know." Then the teacher realized clearly where the whole error had been. She plainly saw that in all her work she had been trying to adjust the condition herself. She had been thinking of it as her class; she was the teacher! So when she willingly admitted Truth into the situation and decided that God was the only teacher, she was then able to eliminate her false sense of personality from the problem. She knew that the storm had ceased and "the ship was at the land whither they went." Now it is a very different concept of class that the grateful teacher meets each Sunday. Needless to say there is rarely an absence from the happy hour in which pupils and teacher are joyously working together to gain a fuller understanding of the truth as revealed in Christian Science. 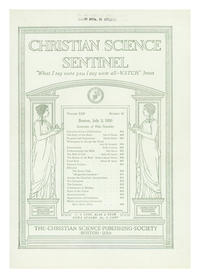