The House Built Without Hands

When one first takes up earnestly the study of Christian Science, turning to divine Love only after having exhausted all known material methods in an endeavor to regain physical health, to overcome an enslaving appetite or a besetting sin,—in other words, in his endeavor to gain spirituality, his experiences will be somewhat analogous to those encountered in the erection of a material building. Several preliminary steps must be taken before starting such erection, one of the most important of which is the clearing off of the building site. There are often old structures to be razed or moved, trees to be cut down, stumps to be taken out, and rubbish to be hauled away before the excavation can be started. The one in charge is careful to perform this important part of the work thoroughly in order that his men may not be inconvenienced or hindered in carrying out the contract. Time is usually an important factor in building work, and unnecessary delays must be avoided. If a contractor should neglect to remove useless and worthless material that might impede his progress and thus preclude the possibility of rapid and efficient work, he would be considered deficient in judgment.

In like manner the young student will find that pride, prejudice, and preconceived notions about God, man, and the universe,—the belief that God is the author of aught but good, that man is both matter and mind, that salvation is for a future world only, and other popular misconceptions of these vital subjects,—are only so much mental rubbish that must be cleared out of consciousness in order to have real progress attainable.

Send a comment to the editors
NEXT IN THIS ISSUE
Article
What Is Spiritual Uplift? 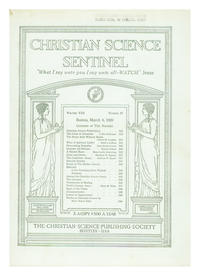