THE Old Testament contains many accounts of the way in which the patriarchs were visited by angels. We are told how Abraham was seated by his tent in the plains of Mamre in the heat of the day, when "lo, three men stood by him." Abraham arose at once and welcomed the strangers, sent for water to wash their feet, and placed before them the best entertainment that he could provide. These spiritual visitors then reiterated to Abraham, in Sarah's hearing, God's promise of a son, though both Abraham and his wife were old and past the usual human limit of age for such a blessing. From this son, Isaac, sprang the children of Israel, who were destined to keep alive among surrounding idolatry a pure monotheism, and of this race was born the Messiah, who demonstrated for the world the true idea of God and man. Gideon, when he was called by an angel to the high task of delivering his people from the Midianites, brought forth his "present" of a cake and a kid. It would appear from the narrative that it was only after he had made this offering that he fully understood that it was an angel of the Lord that talked with him.

Most striking of all is the story of Lot's deliverance when Sodom was destroyed. We read that two angels approached the city gate where Lot was sitting. He got up to meet them at once, and begged them to come to his house. They seemed at first unwilling, but Lot would take no denial, and finally prevailed on them to enter his home, where he made them a feast. That night the men of Sodom made an attack on Lot's house with the intent of doing the visitors mischief, and turned their anger against Lot himself when he withstood them. The angels, however, protected Lot, and his assailants were smitten with blindness so that they were powerless, illustrating the ability of good to afford protection from the malice of the carnal mind. Later the angels warned Lot of the coming doom of Sodom, and the following morning not only hastened him away, but took him and his family by the hand, and urged them out of the city to safety. It is worth noticing that Lot knew nothing of the coming danger when he first met with the angels; but the spontaneous welcome which he extended to the strangers brought its inevitable reward. 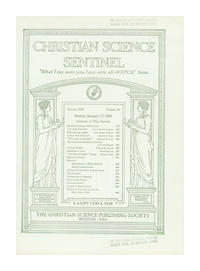