The thought that the affairs of the world may be conducted on a different basis when the air is again cleared at the close of the great war, is now being welcomed by those looking steadfastly to the signs of these times. Truth is not accepted by human beings without a struggle, but open hostilities are preceded by a season of stress. This may be likened to the stress which accumulates in the crust of the earth and which is finally relieved by the earthquake. As usually explained, the gradually cooling globe leaves the outer shell or crust a little too large and its weight gives rise to strains which increase until at the weakest point the resistance gives way and the crust settles, with the result known to us as an earthquake.

Human thought is in a continual state of change, but the methods along which activity proceeds remain more or less intact long after they have been outgrown. This is true in all stations of life, from the least matters of the home up to the great affairs of international government. The endeavor to fit constantly unfolding thought into methods of management which are constantly and necessarily receding into the archaic, gives rise to incongruity and friction in the conduct of affairs. Organization, or the machinery through which things were done, is the mentality which finds itself in the saddle when a recast of the methods in vogue is made imperative through the activity of progressive thought. He who has placed himself or has been placed in a position of authority and who seeks to obstruct progress in order that his selfish grasp on power may not be loosened, tends to become arrogant in his pretensions, ingenious in his inventions of hate, and diabolical in the methods employed to sustain his position. In proportion as he prefers power to progress, he will fight for the position from which he must be removed by the inevitable changes required in the readjustment of organization. 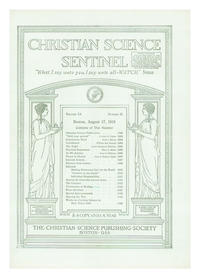