The study of the Bible, in connection with our textbook, "Science and Health with Key to the Scriptures" by Mrs. Eddy, in furtherance of a sincere desire to live righteously, gives an enlarged understanding, a protection and guidance in every affair of life, which it is impossible to describe, and which must be experienced to be either appreciated or understood. In all our lives there are periods of calm and storm. We may go on for months, even years, in the same seemingly harmonious routine, sailing on a calm sea and under a blue sky, and then, suddenly, the storm comes. If we have not secured a sure pilot, we are liable to be shipwrecked.

Noah was, first of all, a just man; and being a just man he walked with God, or lived in accord with God's law of truth and justice. He thus attained spiritual intuition, or enlarged understanding, so he was warned to prepare for a great flood, and was given directions how to build a safe refuge which would bear him and his household over the waters. Now Noah was believing, faithful, obedient, and persistent, and so he built the ark and rode in safety over the flood. The building of the ark did not save him from this experience of stress and storm, but it brought him and his household in safety through it. He did not wait until it began to rain before beginning to build. He laid the keel of the ark probably in bright sunshine under a blue sky. It was a strong and substantial ark, and it took many fine, sunshiny days to build it; but with faithful perseverance Noah labored on, adding plank to plank, examining every seam and crevice so that all might be sound and water-tight; and then one day the sky was overcast, the sun was not to be seen, the rain descended,—but Noah and his household abode in safety, because he had labored faithfully in fair weather, in the sunshine and under the blue sky, when apparently there was no need of effort. 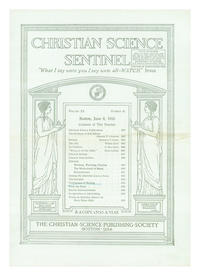