I want to tell what Christian Science has done for me

I want to tell what Christian Science has done for me. I was born in a Christian home, and as I grew up was an active church worker; still I was not happy. I had a bad temper which I seemed unable to control, was despondent, extremely nervous, and always worrying. I enjoyed being miserable, and naturally made life miserable for others as well as for myself. I then began to read various isms, seeking something, I knew not what, and I stumbled on Christian Science. I did not understand it and said it did not appeal to me, but although I left it alone for several months I went back to it. There were no Christian Scientists where I lived, but I purchased a copy of the textbook, "Science and Health with Key to the Scriptures." One day I was waiting for my train at a railway station when a lady came into the room and sat down near me, taking out a copy of this book. I began to ask her questions, and she told me how to study the Lesson-Sermon. Afterward she sent me a Quarterly, also copies of the Sentinel, Journal, and Monitor. Even then my progress was slow, but it was sure. After a while I left the country town where I had been living and went to New York, where I of course attended the Sunday and midweek services.

Through the help of Christian Science I have an entirely new view of life. The bad temper has been overcome, also the habit of worrying. I know there is nothing to worry over, for all people are God's children, created in His image and likeness and cared for by Him. A fear of the dark, which I had had from early childhood, has left me. This fear had been very real to me and had caused me acute suffering. Since I came into Christian Science it has simply fallen away, for I know there is nothing to fear. Four years ago, when in doubt as to whether I should take a certain step, I asked for treatment, and everything worked out beautifully. I simply knew that God's child must be in her right place. I used to be subject to colds and nearly always had a sore throat, but my throat never troubles me any more. I have had only a few colds, and these not nearly so severe as formerly.

Send a comment to the editors
NEXT IN THIS ISSUE
Testimony of Healing
I send this testimony with a heart overflowing with gratitude... 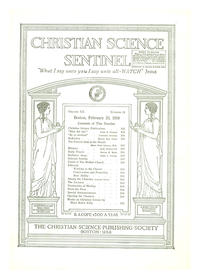