The life of Moses has ever been a source of encouragement and inspiration to all Christian people; and to Christian Scientists it is especially helpful, for the light which is thrown on the Bible through the study of "Science and Health with Key to the Scriptures" enables them to discern and apply the truths hitherto concealed by age-long belief in false doctrines. From his very infancy the history of Moses is most interesting; but from the time that he gained favor in God's sight by turning aside to see the burning bush, his experiences, spiritually interpreted, typify those through which we all pass in our struggle to overcome the belief of life, substance, and intelligence in matter.

When the heavenly inspiration came to Moses telling him that he was the one through whom God would work to lead the children of Israel out of Egypt, the false sense of self began to suggest all manner of excuses. Self-depreciation, doubt, and fear clamored loudly for recognition, but each time they were silenced by the stronger argument of divine Principle. More than once, it is recorded, he went up into the mount to commune with God and thereby renew his courage and gain strength to continue his work. Then, if after receiving the message he still tarried in the mount, the command would come, "Get thee down." In other words, he saw that he must make practical on the human plane the truth he had perceived. 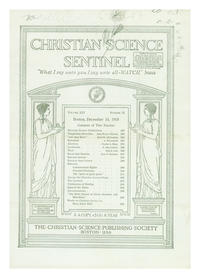