Perhaps the most comforting thing connected with Christian Science is the assurance it gives of God's never failing provision for His children. God does not create new and special things to fit some peculiar need either of the universe or of the individual. We are told in Genesis that God's creation was "finished," and certainly the finished handiwork of the all wise creator requires neither additions nor embellishments. Also, in Ecclesiastes the wise man tells us that "the thing that hath been, it is that which shall be; and that which is done is that which shall be done: and there is no new thing under the sun." The inexhaustible supply in the storehouse of divine Love is ours, but until this fact is recognized and utilized it will be of no more value than a sealed book or a hidden mine. God's blessings are available to His children only in the degree of their recognition of God as Spirit and of His universe as spiritual.

That which is true always was, is now, and always will be. Neither God nor His creation can change. Nothing changes except our concept of things. On page 68 of Science and Health Mrs. Eddy says, "Christian Science presents unfoldment, not accretion," and on page 507 she tells us that "creation is ever appearing, and must ever continue to appear from the nature of its inexhaustible source." Human conceptions are always as material as the thought which forms them; hence the real, spiritual creation is apprehended only as mortals put off a material method of thinking. Mortal mind has assumed to set up a modus of its own, in which the only creation it can cognize is as fickle and unstable as mortal mind itself, and thus to this false thought there is constant mutation or change in everything. 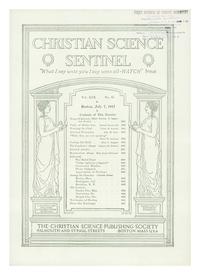