Two utterly distinct concepts of government make themselves felt among nations, the autocratic and the democratic. The former assumes in a general way that the state exists as a separate entity and that the governed find their places under it according to conditions prescribed by the state itself. Self-government, on the other hand, places man in the forefront and presupposes certain natural rights for him which he learns to safeguard by establishing a suitable form of government to express his thought. In other words, the first school of thought magnifies state and proportionately minimizes man, while the second magnifies man and views government as a convenience which men in cooperation with one another may alter and adjust to suit their needs or to further their progress out of one condition into another. As stated by Lincoln, democracy is a "government of the people, by the people, for the people."

Without in any way undervaluing the great qualities of other branches of the human family, but merely stating an obvious and universally conceded historic fact, self-government thus broadly viewed has been especially characteristic of the English-speaking people in different quarters of the globe. For many centuries their political point of view has largely coincided with their religious development. In general terms and without dogmatizing it may be stated that they have leaned toward an individualistic conception of Christianity and have not laid much stress upon mere church government as a guaranty of salvation. Civil and religious developments tend to follow parallel lines, and as the people of any nation, for example, have become more democratic in their thought they have become freer both in politics and in religion. In other words, self-government and religious liberty have mutually supported each other; or, to paraphrase the psalmist's statement about righteousness and peace, self-government and religious liberty "have kissed each other." 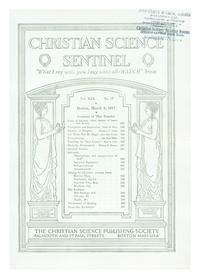