Mortal mind's tendency to personify both good and evil, shows itself in the prevalent habit of humanity to conceive of its friends and enemies as certain individuals, sects, or races. From the perspective of a material viewpoint it often becomes an absolute conviction that individuals or groups of persons have the inherent power either to confer happiness upon us, or to deny us the conditions which would make for the enjoyment of life's good things. The degree in which this factor holds good, however, is determined by the attitude of the individual consciousness toward it. In other words, the effect of others' actions on each person's happiness is supposed to be governed by the law of mortal mind, and the influence of immortal Mind upon the situation is overlooked. The perfect spiritual consciousness contains within itself all that is requisite for its peace and contentment, and by reason of this is undisturbed by the manifestation of any form of error on the part of another.

It should not be so construed, however, that the need for an impersonal sense of good and evil should make us shun the company of our friends and associates as useless factors in the working out of the various problems of life. Through social intercourse and the intermingling of people much good comes to mankind. An instance of this is found in the church service. Christian Scientists recognize that while good manifests itself through persons, yet the cause for the manifestation lies wholly with divine Principle; and similarly, while evil shows itself in the thoughts and actions of individuals, its nature is found in the last analysis to be impersonal. In confirmation of this Mrs. Eddy states concerning evil, "It is neither person, place, nor thing, but is simply a belief, an illusion of material sense" (Science and Health, p. 71). This falsity originated in the carnal mind, which St. Paul tells us is "enmity against God." 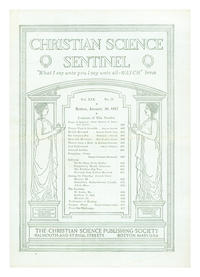