Christian Scientists, like their predecessors in the realm of...

Christian Scientists, like their predecessors in the realm of religious discovery and righteous endeavor to promote man's moral and spiritual welfare, have had their full share of ridicule, slander, and vilification. Condemnation of anything in utter ignorance of the ennobling facts involved, does not get us anywhere. The man who makes abuse an argument, refusing to investigate, "hath faculties that he hath never used, and thought with him is in its infancy." Unprejudiced inquiry into all matters that appear of importance is the demand of the hour on all people. Investigation is the source of proper education. Such education leads us into the light and the truth, and the truth alone will eventually make us free,—free from superstition, free from false ideas, free from "beliefs" that handicap the world in its struggle to progress.

It was evident that the lecture on Christian Science given recently in Omaha made a deep impression on the audience. I heard many words of commendation and approval. It is safe (and sane) to say that such serious, sensible, logical, and convincing talks on the subject of religion will result in far greater abiding good to Omaha and her citizens than expensive spasmodic affairs that appeal to prejudice rather than reason. I beg the privilege of the columns of the World-Herald to suggest a fair and honest investigation concerning the teachings of any cult, denomination, or organization that clearly makes the love of God, good, paramount, that is emphatically for the Christ-love, the love of humanity, the pure life out of the home and in the home, the obliteration of evil in every form, and the relegation to oblivion of superstition.

Send a comment to the editors
NEXT IN THIS ISSUE
Article
In an issue of the Western Colorado Evangel appeared... 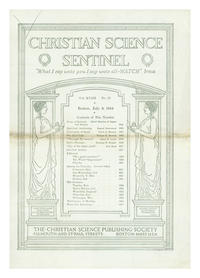