As in the days when Jesus held a wide-eyed little listener in gentle durance as an object-lesson to the contentious disciples, so even now the child is in our midst, a subject for sincere consideration. The importance accorded childhood today is seen in the tendency of the age toward attempted betterment along the lines of infant mortality, child labor, and child study, as epitomized in the movement for "better babies." The cry is, "Let us give to them, and make of them the very best." Our revered Leader has never failed to recognize the needs of childhood, and has always acknowledged the child's readiness to accept the truth. On page 237 of Science and Health she says, "Children should be taught the Truth-cure, Christian Science, among their first lessons, and kept from discussing or entertaining theories or thoughts about sickness."

A captive Jewish lad was once summoned to the Babylonian court. He was to reside there three years under the tutelage of the wise men of the land, learning their language and mystic lore and being fed with the bounty of the royal table. Surely a promising outlook for a boy of ambition! Yet he begged of the head eunuch a simple diet, and communed diligently and daily with the God of his fathers, counting this the one needful object of understanding. Alarmed for his charge's chance of royal favor, the eunuch demurred; but the boy offered a fair and businesslike proposition. Let a ten-day trial be made; then the eunuch might compare his condition with that of those who had "fared sumptuously every day." This was agreed to, and when the time for a decision came, the young face, smiling assurance, showed a health and fairness surpassing all the others. When the time of study and training was ended and the boy stood before the king for a final test in keenness of mentality, the understanding which God had given him was proved tenfold that of the king's wise men. 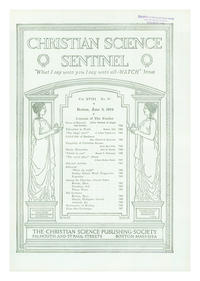