In Science and Health Mrs. Eddy makes it plain that the origin of disease is mental, and that its remedy is likewise mental. Students of this book soon find that it is a false process of the human mind which induces the sense of disease, and that by a correct, scientific process of reasoning, and a sincere desire to know the truth about God and His creation, the nothingness of disease may be realized. An experience which the writer had some time ago confirmed him in the reliability of this teaching.

One night I awoke suddenly and found myself, according to the evidence of the physical senses, very ill. The condition was distressing, and with it all there seemed to be a disinclination to work in Christian Science; but I knew that if I would not be a hypocrite I must take the same medicine I gave others, and this thought overcame what Mrs. Eddy calls "unnatural reluctance" to apply the truth. (See Science and Health, p. 420.) I began to reason that for muscles to move or to be quiescent there must be volition; that volition is a mental quality; that there is only one Mind, so that all volition rightfully belongs to this one Mind; that the will of infinite Love does not operate for discord and misery, but only for good and joy. Then there came to me as never before the meaning of Mrs. Eddy's statement on page 450 of Science and Health, that to the Christian Scientist sickness "is no less a temptation than is sin," and I saw clearly the baseless delusion of mortal belief, and that I must not assent to the existence and operation of another mind opposed to the divine Mind. 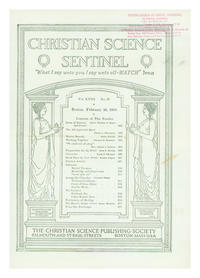