It is generally believed by mortals that disease is accompanied either by too much or too little action in the physical parts involved in the discord. For example, fever is thought to be a case of overaction, while a chill is ascribed to inaction of the bodily functions. The fact, however, is exactly what Science and Health declares of real being (which is eternally spiritual), and what we must affirm for ourselves whenever discord manifests itself in the body, namely, "There is ... no inaction, diseased action, overaction, nor reaction" (p. 427).

One who is instructed as to the truth of being, intelligently declares that all wrong action or lack of action is unreal, because he knows that in reality God, divine Mind, is the only source of action. Science reveals divine Mind as ever active, and this continuous action of the one cause and creator, our God, must be harmonious. God being All-in-all, the only real activity there is, must be the activity of God, and it is therefore perfect. Thus the spiritual Scientist reaches the assurance that a manifestation of either inaction or overaction is but a false and unreal condition. This understanding, and the realization that God is ever present and manifest in perfect, harmonious action, is the remedy with which to destroy the discordant action of mortal mind, and establish the harmonious action of divine Mind. 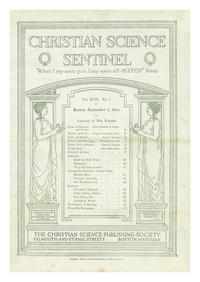