"Ye have not chosen me." When we consider what it must have meant to the disciples of Jesus to give up as much as they did and follow him from place to place, listening to his teachings, patiently learning the lessons he taught them and striving to put them into practice, then going out to heal and teach at his command, we can imagine that it might come to them with somewhat startling effect to be told that the choosing was not placed to their credit. Could not Matthew look back to the time when he left the tables where he collected the custom fees, and had not Simon, Andrew, James, and John forsaken their nets and boats and followed him? What, then, did Jesus mean? He must have meant more than simply a personal influence, whereby one person selects another for a service, for Jesus showed that his work was always far above mere material or personal considerations, and he spoke of his works and acts as the reflection or expression of the Father. He said, "I came down from heaven, not to do mine own will, but the will of him that sent me." His call, then, was the divine impress or inspiration coming to the consciousness of these men, a call tto which they must respond or be untrue to their higher nature, their true selfhood.

The appeal of Christian Science comes to the world in a different sense and by a different method than does the presentation of the gospel message through the ordinary preaching of today. To the thought that is prepared it comes as a divine impulsion which cannot be refused or denied. The truth seems to have come to Paul in this way, for we find him saying, "Necessity is laid upon me; yea, woe is unto me, if I preach not the gospel!" We hear mention sometimes of those who have decided to take up Christian Science and devote their lives to its study and application. It would appear from the phraseology used at times as if Christian Science were being honored by the consideration thus given it, and occasionally such a mental position has developed into the use of human will or intellectual power, and the work that seems to be done is simply the result of mortal mind influence. The human mind prepared for the Christ-thought is affected in an altogether different way. There is uncovered to it the unreality, the nothingness, of any life or experience apart from the divine. There is no choice, no decision to make, because of the clear sense of the supremacy, the allness, of God and His idea. Such a one involuntarily exclaims with Paul, "For me to live is Christ;" and to him the voice of the Christ comes as of old, saying, "Ye have not chosen me, but I have chosen you." 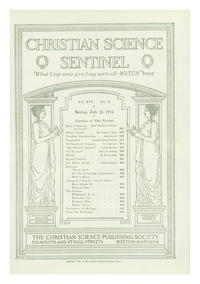