The Pillar of Salt

The experiences through which Lot passed after leaving Abraham in the land of Canaan, were varied and numerous. He had chosen for his home that fertile plain known as "the garden of the Lord," situated twelve hundred feet below the Mediterranean, in the valley of Jordan. The rich pasturage of this well-watered oasis was already supporting the population of five small cities, but in spite of this Lot seems to have found no difficulty in securing sufficient grazing land for his extensive flocks and herds. As a crowning feature of the picturesque beauty of the scene, there stretched through the valley an inland sea or lake forty-seven miles in length, fed by the river Jordan, which undoubtedly tempered the climate and lent softness to the air. This lake, which is now called the Dead sea, is the lowest body of water on the earth's surface. It has no outlet, but as the result of evaporation it retains about the same level and this vapor in turn is condensed in heavy dews.

It was among these most attractive surroundings that Lot and his family had determined to live. They were apparently unsophisticated people, quite unaccustomed to the wickedness of city life. At first Lot pitched his tent outside the walls of Sodom, but later we find him living in his own house inside the city. St. Paul's words, "Evil communications corrupt good manners," had not then been written; hence, we must make suitable allowance for Lot's apparent apathy to the demoralizing conditions of his environment. 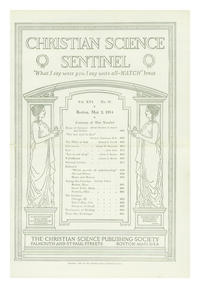