Referring to the communication of your correspondent...

Referring to the communication of your correspondent "F," as printed in a recent issue, it appears that he has concluded to stand with your other correspondent, "Y," "against Christian Science." He is mistaken. That which links these modest men of "letters" is not unity in opposition but unity in misinformation. The chances are, neither of them is really opposed to Christian Science; they merely agree that the grotesque thing they have to some extent similarly described, is not entitled to the name of Christian Science. It should be added that such agreement is not necessarily confined to "F" and "Y," but probably is shared by almost everybody from "A" to "Z," including certainly all Christian Scientists. When they shall come to know what Christian Science actually is, what it is to the great numbers of earnest men and women who have won their way to the comprehension of its view-point and put it to the test in their daily thinking and living, these two worthy correspondents no doubt will not withhold their approval; for nothing in what they have written can be construed as indicating that either of them would wilfully stand in the way of any agency which makes for the saving of mankind from evil.

It is to be regretted that any of those who have volunteered in the service of good should even temporarily waste their efforts in the fruitless propagation of misinformation concerning the motives and methods of others who are striving for the achievement of the same exalted purposes as themselves; but Christian Scientists are comforted in the knowledge that they at least have been better instructed in the spirit of the golden rule and of the command to "judge not." Christian Scientists are not in doubt as to the ultimate failure of intolerant criticism; they have long observed that their cause continues to grow with increasing rapidity, notwithstanding its having been subjected to the extreme limit of the human mind's capacity for misrepresentation.

Send a comment to the editors
NEXT IN THIS ISSUE
Article
In a recent issue appears an extract from an article in a... 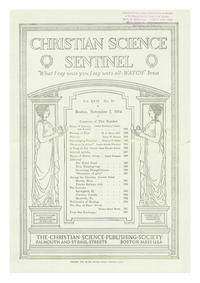