My attention has been drawn to a reference to Christian Science...

My attention has been drawn to a reference to Christian Science which appeared in a recent issue under to heading of "Talks for a Quiet Hour." I have read the paragraphs with considerable interest, and agree most heartily with the statement of the writer that there is a truth in Christian Science. In view, however, of what is said in the preceding paragraphs, in the article to which I refer, some misconception might arise as to the actual teaching of Christian Science, and I will ask you to allow me to point out that the one thing Christian Science does not teach is auto-suggestion. I do not say that your contributor definitely states that autosuggestion is in any way connected with Christian Science, but such an impression is liable to be gained by those who read what he has written. The great and rapid growth of Christian Science is due to the fact that it is revealing absolute truth to mankind. Christian Science is daily giving practical proof of the fact that man's rightful heritage is dominion over sin, sickness, and all discord. Christian Science teaches and proves that the law of God, the law of good, is available today just as it was nineteen hundred years ago. Jesus the Christ came to fulfil and not to destroy, as he himself declared, the law of God, and in so doing he healed the sick, reformed the sinner, raised the dead, and healed many other conditions of discord and limitation.

Now there is only one way by which these works, which Jesus declared so emphatically must follow a correct understanding of his teaching, can be accomplished, namely, through a spiritual or scientific understanding of God and His perfect creation, including man. This understanding can never be attained through mere intellectual effort, and the works which result from a scientific understanding of his teaching can never be accomplished by the manipulation of the human or carnal mind. "I and my Father are one," Jesus said, and it is through the earnest desire and effort to let that Mind be in them which was also in Christ Jesus that the healing of sickness and the destruction of sin is accomplished by Christian Scientists today. The human or mortal mind is obviously a house divided against itself; that is to say, the human or material mind alone believes in both good and evil, believes that the two are at war, and that evil is frequently the victor. There is perhaps no more startling statement in the Christian Science text-book, "Science and Health with Key to the Scriptures" by Mrs. Eddy, than that found on page 192, "Evil is not power." Nevertheless, Mrs. Eddy explains on page after page of Science and Health how this truth can be demonstrated, and it is just because the statement is true that an understanding of it results in the improved condition of the student of Christian Science. It will be seen, therefore, that Christian Science is not engaged in a mighty battle with evil as a fierce opponent, but it is proving that today, just as when Jesus taught his disciples in Palestine, a correct understanding of God must inevitably result in the destruction of the belief in the power of evil, whether manifested physically or in any other form. This, it is clear, cannot be accomplished by any manipulation of the human mind.

Send a comment to the editors
NEXT IN THIS ISSUE
Article
Under the caption, "Rid of Mental Rubbish," your valued... 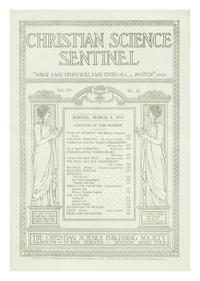