MORTAL thought revolves around the supposition that life is a creation or development of what it terms matter, and that man has therefore a material origin, personality, and environment. Limited by this belief to a material outlook, mortals mistake ephemeral sense-phenomena for realities, and submit to the reign of materialism as the divinely chosen means for governing the universe. Human passions and impulses, ambitions and desires, are the product of this false concept, the earth and heaven of so-called mortal consciousness; and only as this consciousness reaches through Christian Science a higher and broader view, do we begin to apprehend the wholly spiritual nature of life and its manifestations.

"Here [in the material sense of things] have we no continuing city," said Paul; hence Christians should not consider it their abiding-place, nor be influenced by the testimony of matter to the extent of feeling at home in it. We seek a city "to come," continued the apostle, not implying a future state but a change of consciousness. However, while we are satisfied with a purely material sense of health and life, happiness and prosperity, we are not seeking that spiritual habitation or heavenly consciousness spoken of in Scripture as "made without hands." Contentment with worldly success or case is always fatal to Christian progress, for it is, in effect, a mesmerism in which one is oblivious to the presence and actuality of God's kingdom on earth, the reign of good in individual consciousness. 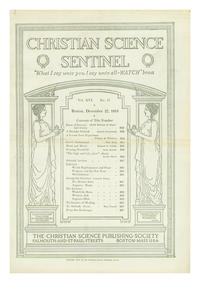