Two ladies calling at the home of a friend were told that the baby, who was perhaps two years of age, had never learned to walk, because whenever she was placed upon her feet she screamed with pain.

The visitors returned to their home, and the incident might have been forgotten had they not chanced, two weeks later, to hear that the baby had recovered, and that the parents wondered if their call had had anything to do with it. These ladies were both of them Christian Science practitioners, but since the child's parents were opposed to Christian Science the subject had scarcely been mentioned. The parents were anxious about their baby and a doctor's remedies had failed to give any improvement, but they had not asked for help in Christian Science. 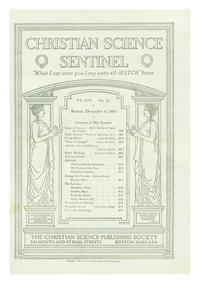