For two years I had what was supposed to be rheumatism...

For two years I had what was supposed to be rheumatism in my knees. I went to some hot springs, where the doctor put me on a system of diet and baths for six months, but with no effect. My knees were so painful that I could hardly rise from a chair without assistance, and I walked with difficulty. After leaving the springs, I went to my home in Chicago, and there was examined by a prominent physician, who diagnosed the case and said that I should have an operation on each knee. My husband objected to this, and after returning to San Francisco I went to a Christian Science practitioner and was healed in a few treatments,—four or five, I believe. This was during 1911, and I have had no return of the trouble.

I was also healed of a felon on my thumb, which was extremely painful. The pain was overcome in one treatment, and all swelling gone in a few days. Then too I have been healed of chronic headaches, from which I had suffered since childhood. What I am most grateful for, however, is the healing of a sense of despondency and fear which had held me in bondage for weeks at a time; but I was patiently led into the understanding of this healing truth, and I am now able to help myself out of many minor difficulties.

Send a comment to the editors
NEXT IN THIS ISSUE
Testimony of Healing
It gives me great pleasure to speak of the healing power... 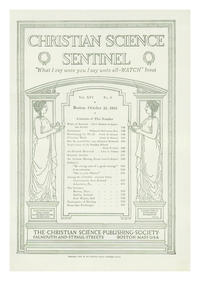