BRINGING IN THE TITHES

An editorial which appeared some time ago in the Sentinel pointed out very clearly the error of looking upon certain members of branch churches as professional readers, whereas, all of the members should have in mind the thought of preparation for a call to the duties and responsibilities of readership. The thought then came to the writer that the same error manifests in many of the branch churches with regard to professional testimony-givers. Fear, lack of sense of the imperativeness of this duty, and oftentimes a sense of bewilderment as to how to go about the telling in public of that which can be so easily and glibly recited in private, seems to be the root of this difficulty. Many persons try very hard, and at times apparently without much success, to overcome this growth-retarding state of mind.

A lady once entered the office of a certain practitioner, and saw before him upon his desk a typewriter. He informed her casually that he had been preparing a testimony to be given at the Wednesday evening meeting. She opened her eyes at this, and exclaimed, "Why, I thought when you gave a testimony you just got up and the Lord filled your mouth, according to the way that Jesus instructed his disciples to do!" He answered, "The conditions are different in this instance. Besides, why may not divine intelligence just as well instruct me here and now what I shall say, as later? This gives me an opportunity to clothe my statements in the clearest and the most fitting, the fewest and the simplest words in which it is possible to convey the ideas, and so makes the testimony more effective." 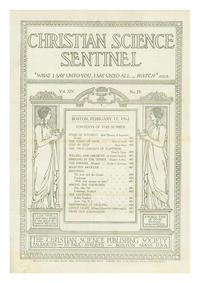