Christian Science does not teach that disease and pain...

Christian Science does not teach that disease and pain are unreal to the human senses, any more than natural science teaches that matter is unreal to them. "Sickness," writes Mrs. Eddy on page 460 of Science and Health, "is neither imaginary nor unreal,—that is, to the frightened, false sense of the patient. Sickness is more than fancy; it is solid conviction. It is therefore to be dealt with through right apprehension of the truth of being." Christian Scientists endeavor to give humanity this true sense of being, and exactly in proportion as they succeed in this, they succeed also in destroying sickness and pain. Our critic is simply guilty of the mistake which is being made by other critics of Christian Science every day, of confusing the absolute with the relative.

Now, if you are going to criticize the deductions of any thinker, you have got to recognize his definitions. If you were to start by assuming that Euclid defined a straight line as a circle, you could with complete ease reduce his reasoning to an absurdity. Now, what is meant by real in Christian Science is God and the spiritual universe. Consequently, when Christian Science explains that sickness is unreal it does not mean that sickness is not relatively speaking, extremely real to the human consciousness; it simply means that it is not God-created, and so not eternal. As long, however, as the human senses are educated to believe in the reality of matter, disease and pain will continue to represent a reality to them, and man will never enter the kingdom of heaven. Jesus said, "Repent ye: for the kingdom of heaven is at hand." The word translated repent means literally to come to a conviction afterward, and so to change your mind. Consequently, when a man changes his mind from a belief that sin, disease, and death are God-sent or God-permitted—a case of distinction without a difference, if ever there was one—to some understanding of the fact that these things are, on the contrary, nothing but a negation of divine love, he touches the hem of the seamless garment of Christ's divine Science, and, to the extent of his knowledge, is "endued with the spirit and power of Christian healing" (Science and Health, p. 55).

Send a comment to the editors
NEXT IN THIS ISSUE
Article
The term "sin" has a much broader signification than... 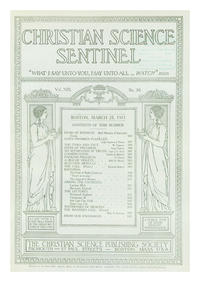