With a heart full of gratitude I wish to testify to Truth's...

With a heart full of gratitude I wish to testify to Truth's healing power, as demonstrated in our home. Over two and a half years ago, our three-year-old boy was taken suddenly ill with convulsions, and after about a month's treatment by a physician, we were told it was a form of epilepsy and considered incurable, but that the child's age was in his favor and he might outgrow it. During the next year and a half we consulted first one physician and then another, including three month's treatment under an osteopath, at last placing the child in a hospital at Ann Arbor, Mich., where he remained six months under treatment. At the end of that time the physician in attendance told me he considered it a hopeless case. The child might, he said, live for years, but would eventually become helpless and probably an imbecile. In fact, at this time the child was apparently losing the use of both hands and feet.

It was then, through the suggestion of a friend, that we decided to try Christian Science, and placed the child in the hands of a practitioner. Today our boy is a strong, healthy child, mentally and physically. The healing was slow, but for this I am now grateful, for through the study thus called for I have myself gained much. Christian Science has given me a knowledge of God, whom I had never before known. I am very grateful to God, and to Mrs. Eddy, through whom this healing truth was revealed.

Send a comment to the editors
NEXT IN THIS ISSUE
Testimony of Healing
In June, 1907, Christian Science came to me as a light... 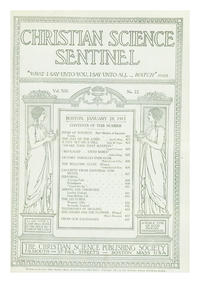