It is with gladness and gratitude that I testify to the...

It is with gladness and gratitude that I testify to the good which Christian Science has brought to me. I was never strong, having seemingly inherited a delicate constitution, and when I gained my first understanding of this truth, over two years ago, I was in an almost hopeless condition. For many years I had suffered from stomach, catarrhal, and nervous troubles, and had reached such a state that any unusual exertion would result in a severe attack of illness. Colds were also followed by these attacks and an illness of this nature, in February, 1907, led to my being sent to a Boston hospital, where the physician confirmed the diagnosis already given by two other physicians. I was advised, when leaving, not to work beyond my strength, I resumed teaching, however, as it seemed necessary, and kept up, till the close of the session, by means of so-called nerve stimulants. My physician, and others, thought I would not be able to teach another session.

It did not occur to me seek help from Christian Science, as I had heard of it many years before, through unfavorable press references. I had now, however, for several months been associated with a Christian Scientist, whose life was an eloquent testimony, and much of my prejudice was laid aside; yet it seemed to me a thing incredible that there should be spiritual healing in the present age. Upon my return from the hospital, I found several copies of the Sentinel which had been sent me in my absence, and in an article these words were quoted from Science and Health: "Every law of matter or the body, supposed to govern man, is rendered null and void by the law of Life, God" (p. 380). This gave me a new viewpoint and some conception of the teaching of Christian Science, but being much occupied with other things, I gave it little thought. A few months later, however, the truth expressed in these words dawned upon my consciousness.

Send a comment to the editors
NEXT IN THIS ISSUE
Testimony of Healing
I have been healed of lung and spinal trouble, also of... 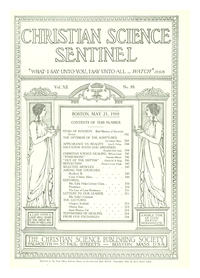