Along nearly every line of human research and investigation the first point to consider is the source of the information desired, and it is very generally acknowledged that the only feasible and consistent course to pursue is to go direct to the fountainhead of information. In the purchase of many of the world's commodities one of the first points of consideration is their origin. It they are of standard make, they are accepted as reliable. Through honest dealing with the public and the handling of goods of recognized worth, the name of many a business house has become a sufficient guarantee of any product that it may offer for sale. The "just as good" article placed upon the market by other dealer is slow in finding recognition until the genuineness of its source has been thoroughly established. When it comes to the subject of religion, however, we witness a most radical departure from general commercial habit. There seems to be an inherent tendency in the human mind to look in all directions except the right one for authentic information upon the subject of the Christian religion. Upon no other is human opinion more eagerly sought and accepted as authority.

Mrs. Eddy, the Discoverer and Founder of Christian Science, has set the Christian world a most commendable example, one that may well be heeded by professing Christians. She knew that the Bible was the recognized text-book of Christianity, and from its inspired pages she sought an explanation of the spiritual light that had been revealed to her. She did not reach out for any human theory or opinion upon so sacred a subject. She confined her research to the sacred word of the Bible; she went to the fountainhead for a scientific explanation of Jesus' healing works, and she found it in its pristine purity and simplicity. She knew that she had found it because she was enabled to prove it in demonstration. To her enlightened thought it was a discovery of the lost art of Christian healing. 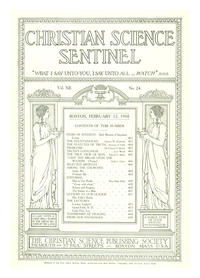