Any one who has seen ancient coins must have been struck with at least one thought: the coins were the same as at the moment they were formed by the die. The impression which promoted the crude metal to the official dignity of coins continued through the centuries as the expression of the recognized or sovereign power of the day.

This thought, that the impression persists as expression, finds a wider, more striking application in the spiritual realm. In the first chapter of Genesis it is declared that "God created man in his own image, in the image of God created he him." Thus the man whom God created bears the "impression" of God, and this impression must forever abide, but owing to the confusion wrought in general thought by erroneously assuming that the allegorical Adamman was divinely formed, a true God-man, mankind have lost sight of the spiritual man and have thought and acted as if the fleshly body were God's image and likeness, though the Bible expressly and repeatedly declares the contrary. 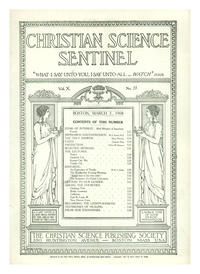