An audience that filled the National Theatre yesterday afternoon [May 6] heard Rev. Irving C. Tomlinson, of Concord, N. H., as he told of the worth and work of Christian Science. Mr. Tomlinson was introduced by Gen. Henry M. Baker, a cousin of Mrs. Eddy and formerly representative from New Hampshire. General Baker said in part,—

Christian Science needs no apology. It has demonstrated its right to exist. Within a score of years it has established itself in the hearts of thousands of educated and thoughtful men and women who rest confidently in its faith and practice. Its hundreds of beautiful churches and thousands of adherents testify to its greatness and power. Its friends and foes alike know that it has come to stay, and that to-day it is one of the most efficient factors in the world's activities, charities, and piety. 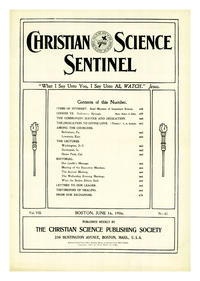