with contributions from Emmet W. Bagby, E. E. Fitch, Attorney B. B. Brett

Judge William G. Ewing lectured on Christian Science at the Kentucky, Sunday, November 5. He was introduced by Judge Emmet W. Bagby, who said in part,—

Ladies and Gentlemen:—It is a distinct pleasure, and I esteem it a great honor, being a stranger to the Christian Science organization of this city and in nowise committed to its tenets, that I should be selected to introduce to you this afternoon one of its most distinguished representatives. I am confident there are many others who could more acceptably perform the office I shall with some misgivings undertake. Among all who most sincerely seek the truth, no matter what the human limitations by which it is hedged about,—among all earnest, honest, generous souls, there is a kinship, and their friendly co-operation and sympathy may always be depended upon in every effort to convey to the world the blessings which the declaration of the truth confers, no matter what the flag may be under which that truth is borne. It is this benignant sentiment, inculcated by that catholic charity which is preached and practised by the religious organizations in every civilized community, that constitutes the redeeming feature of this wonderful century. I hold that he who imperils the integrity of this beneficent spirit of toleration, or brings disparagement upon it, endangers the peace and retards the progress of society. It is the cultivation and practice of an enlightened toleration, which secures to a people those blessings of civil and religious liberty so freely enjoyed by the citizens of our own beloved republic, and it is the violation of this wholesome rule in the conduct of civic affairs, which produces in government those evils which at this moment so sorely disturb our unfortunate neighbor,—ill-fated Russia. It is the practice of this commendable virtue which assembles here this afternoon this large and intelligent audience, composed of some of the best people from every religious denomination in the city, inspired by an eager desire to hear from the lips of one of its most learned advocates an able presentation and discussion of the doctrines which are to-day attracting the attention and guiding the lives of such a large and respectable body of adherents, an organization that contains some of the best educated, most cultured and refined Christian men and women in America and Europe. 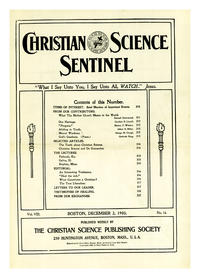