I have long wished to express my gratitude for the...

I have long wished to express my gratitude for the priceless gift of Love in our revised Science and Health. After the first reading of our text-book some years ago, these two characteristics remained uppermost in my mind,—its purity and common sense. During the following years of study and demonstration, I had a constant desire so to adjust its teachings to the details of daily life that I could meet every man on his own mental plane, and as told of the Master, take him by the hand and lift him up.

In the mean time, severe experiences resulted in such confusion of thought on this subject that I was almost overwhelmed with doubts and tempted to give up the task as hopeless. Many questions had to be laid aside for a clearer exposition from some source, either in confirmation or in the correction of misconceptions. Mental and physical prostration followed, the recovery being very slow, but when the time was fulfilled, the new edition of Science and Health came with such loving assurances that it was like a flood of sunshine after a winter's storm, and peace and health became established. Later, it was my pleasure to look over some early editions of Science and Health, and I found with joy the same divine Principle stated in true and strong terms, and this proved that when understood a different wording could not obscure the light.

Send a comment to the editors
NEXT IN THIS ISSUE
Testimony of Healing
I became interested in Christian Science about two years... 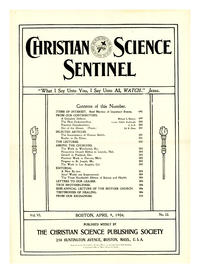