By Way of Reminder

THE cause of Christian Science has grown with startling rapidity. It has attracted to itself multitudes, who have been healed of sickness and redeemed from sin, and these have silently and spontaneously aggregated themselves, as an important religious and educational denomination or society, with far-reaching activity and influence.

We are adherents of a religion which offers much, promises much, demands much. The world will require of us that we perform in accordance with our professions. We are and shall be in the glare of criticism. We shall be subjected to the closest scrutiny, the most uncompromising, exacting surveillance. We shall need greatly, to avoid the intoxication of popularity. Far better for us to endure the throes of persecution, than to exult in the flush of self-satisfied success. Numerical strength does not necessarily indicate success on the part of any "cause," nor the righteousness of such a "cause." The success of the Christian Science Church does not depend on attracting to itself thousands, or even millions of men, nor on accumulating the mere externals or paraphernalia of religious organization. The reformative and healing efficacy which inheres in Christian Science and its practice, are manifested in the spiritual, moral, and physical regeneration of men and women. Its influence is to make people honest, pure, upright, unselfish, merciful, loving. Its immediate fruitage will ever be evidenced by a grander, nobler manhood. 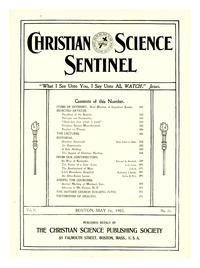