The United States Circuit Court last week handed down a decision in the suit of the United States against the Northern Securities Company, enjoining the company from voting the stock of the Northern Pacific or Great Northern Railway Companies, but allowing the return of such stock as had been delivered to the holding company. The opinion was unanimous, and was written by Judge Thayer. This case has been pending during the past year. It will be appealed to the United States Supreme Court. The decision rendered in this case, that the Northern Securities Company was a combination in "restraint of trade." applies equally to other combinations and trusts.

The presentation by the American financial agent to the Chinese Government for signature of a silver bond for the American indemnity is said to have stirred the other members of the International Financial Commission, who hold out for a settlement on a gold basis. It is stated by Secretary Hay. however, that the silver bond follows strietly the language of the protocol and involves no change in the policy on the part of the American Government. 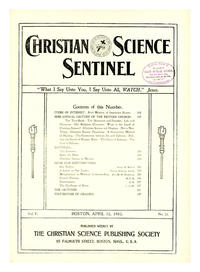