The lingering belief in two realities, one power called God, and another power called evil, must finally give way to the scientific conviction of the oneness of reality, the oneness of power, as brought to consciousness through the demonstration of Christian Science. We learn by precept upon precept, line upon line, that there is not an evil power to be destroyed, but only a wrong belief in evil power to be corrected by the knowledge that good is all power; that there is not a material universe to be destroyed, but only the belief in materiality to be done away with through knowledge of the spirituality of all things real; not a mortal man who must die in order to become immortal, but only a mortal sense of man to be put off through the revelation of man, the only man, as already spiritual and immortal. Divine Love destroys nothing, because nothing has existence or reality except His own manifestation.

In "Miscellaneous Writings" by our Leader, on page 259, we read, "It is this infinitude and oneness of good that silences the supposition that evil is a claimant or a claim. The consciousness of good has no consciousness or knowledge of evil; and evil is not a quality to be known or eliminated by good." This understanding removes the thought of any necessity for destruction or death, which can have no possible place in the infinite plan of infinite intelligence. Divine Mind has made all and manifests Himself in every idea, and not one must die or be made over in order to be perfect and immortal. 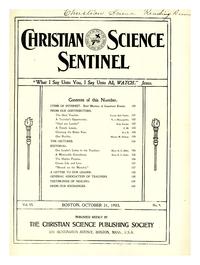