Alfred Farlow with contributions from Newman

Your good paper reported that Rev. Mr. Collier denounced Christian Science as a "harmful delusion," that his knowledge of the subject was based upon his study of criticisms of The Christian Science Journal and Science and Health. So far as I am able to judge, the principle objection to this Science on the part of critics is regarding its teachings concerning matter. Why one should fight so assiduously for that of which the great Master of Christianity never had a favorable thing to say, and of which he always spoke disparingly, seems strange. But we think this is mainly due to the fact that the critics of this faith do not note what this Science gives in the place of that which it repudiates. 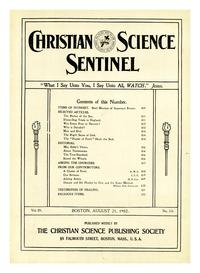