The anthracite coal strike began May 10. On Friday, October 3, the strike being still unsettled, at the invitation of President Roosevelt, representatives of the miners and coal operators met with him in Washington to confer on the situation. As the outcome of that conference it is practically assured that both of the contending parties will accept the appointment by the President of a committee of arbitration whose finding shall be final and binding. The committee, already named by the President, will consist of the following men: Brigadier-General John M. Wilson, U. S. A., retired, late chief of engineers; E. W. Parker, Washington, D. C., expert coal mining engineer, statistician of the coal division of the United States Geological Survey, and editor of the Engineering and Mining Journal of New York; the Hon. George Gray of Wilmington, Del., of the United States Court; E. E. Clark, Cedar Rapids, lowa, grand chief of the Order of Railway Conductors; Thomas H. Watkins, Scranton, Pa.; Bishop John L. Spaulding, Peoria, Ill; Carroll D. Wright of the United States Labour Bureau.

Commenting upon the broad international aspect of The Hague International Court of Arbitration, Judge Penfield of the United States Department who attended the recent hearing on the "Pious Fund," says: "The Hague Tribunal is accomplishing important results for America. Arbitration is not taken so seriously in Europe as it is in the United States. The American idea of treating international arbitration thus is beginning to exert its influence; it promises to overcome European prejudice and to lead to a general acceptance of this principle. 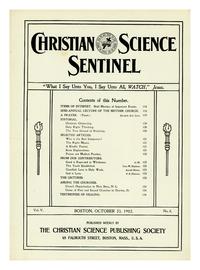