Two very important decisions were rendered by the United States Supreme Court on December 2. The first was regarding the right of the United States Government to collect customs duties on articles brought here from the Philippines. The Court held that the islands have been domestic territory since 1898, and under the existing tariff laws, duties cannot be collected. The second decision was regarding Porto Rico. In this case the Court held that Congress has a right to erect a tariff barrier between the United States and possessions thereof. It will thus be seen it is possible for Congress to pass laws in regard to the Philippines similar to those enacted for Porto Rico, under which duties can be imposed on goods coming from the Philippines, and upon American goods going into the islands.

President Roosevelt's message was read in Congress on Tuesday, December 3, and was received with unusual interest. Having received through the message the official announcement of President McKinley's death both houses adjourned out of respect to his memory. In the House a committee consisting of one member from each State, and in the Senate a committee of eleven were appointed to act jointly in arranging for memorial exercises in Congress at some later date. Secretary Blaine delivered the funeral oration on President Garfield at a joint meeting of the two houses. A similar commemoration of President McKinley, with an oration by some national character, will doubtless be arranged by the special committee.

Send a comment to the editors
NEXT IN THIS ISSUE
Article
Mr. Farlow Replies 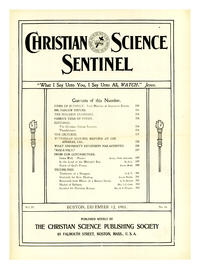