The Isthmian Canal Commission, after considering all the information obtained with regard to the Nicaragua and Panama Canal routes, have decided to report in favor of the former. While the Panama Canal would be shorter and would have fewer locks and less curvature, thus saving twenty-one hours in the passage of a ship from the Atlantic to the Pacific Ocean, this advantage is offset by the fact that the Nicaragua route is nearer to the United States, and a ship sailing between New York and San Francisco could save time by using this canal. The report provides for a canal which shall have a depth of thirty-three feet and a width at the bottom of at least one hundred and fifty feet. The estimated cost of this canal is about two hundred million dollars.

In his annual report the Second Assistant Postmaster General urges regular and direct fast mail service between the Pacific coast and the Orient. Also the reëstablishment of pneumatic tube service generally. The report shows that on June 30, last, there were 267,357 miles of star route service, 183,358 of railroad routes, 45,779 of railway post-office car routes, and almost three housand miles of electric and cable car routes.

Send a comment to the editors
NEXT IN THIS ISSUE
Article
Testimonial Meeting at Cleveland, O. 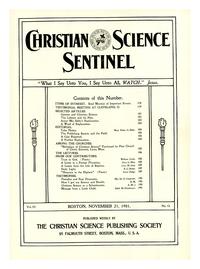