BY CARRIE B. WOLCOTT.

There came a time in my life when materia medica had failed, and I had little to look forward to. I had never been strong from childhood, and while I believed and earnestly endeavored to live the teachings of Jesus, I did not know that they afforded relief from sickness, and in my efforts to help others I felt myself losing health and strength. At this time Christian Science was brought to my notice, and I was persuaded to take treatment. At once hope was awakened, and I began to feel that I should be restored to health, for I felt the healing was of God—divine Love made manifest. In my case the healing was a steady growth in the right direction until the work was complete. I was helped and encouraged to press forward in this new—old way of God's appointing by discerning at the outset that Christian Science was an exact science, as much so as the science of mathematics. That understood, it furnished the rule for the solution of all human problems. I saw that it would meet every human need.

There were many problems that I wanted solved, and often as I read the book, "Science and Health with Key to the Scriptures," the desire was with me to understand the Truth it contained, so that I might apply it to some particular need, and as I read one thought after another would be made plain to me, and the problem be solved. 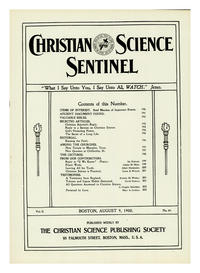