with contributions from B., Hattie L. Whitaker, Helen C. Sherer

Beginning Sunday next (January 7) the services of the Christian Scientist society will be held in the Knights of Pythias Hall, 112 West State Street, a much larger hall than that which has been their meeting place for the last few months; also one of the pleasantest halls in the city. A well-informed member of the society says, "The growth of Christian Science throughout the country is a matter of common knowledge, and Rockford does not lag. While many have supposed that Christian Science was introduced here years ago, and that it has been followed more or less continuously ever since, the fact is that Christian Science, which by the informed is understood to refer to teachings based wholly upon the Bible and the teachings of Rev. Mary Baker Eddy, had its first systematic start here, so far as known, in the summer of 1897. Five or six persons interested met at that time, but it was not until some months later that a society was formed. In a year from the beginning the number attending had so far increased that removal from the small quarters occupied was necessary. The attendance at Sunday service at times reaches one hundred now, and averages probably seventy-five; while fifty to seventy are usually in attendance at the Wednesday evening meeting, which in Christian Science takes the form of a testimonial service. Here, as in other places, the number interested and attending the meetings is steadily growing. The majority are attracted by the physical healing promised, and it would seem must be held by the fulfilment of the promise. More than this, there is much and increasing testimony, not alone in the publications of the sect but in the secular press, going to show that there is, inseparable from the physical benefits derived, greatest spiritual help. That this as well as the claims of physical healing are by the majority of people doubted is perhaps not strange, since the average person's of what Christian Science teaches, both as to sickness and as to sin, is very far from the truth of what is taught. This misconception is no more ridiculous to those outside than to those who have knowledge of what Christian Science really is."

The Christian Science sermon is composed wholly of citations from the Bible and the text-book of the sect, "Science and Health with Key to the Scriptures" by Mary Baker G. Eddy. Mrs. L. V. Weatherwax, a member of the Mother Church, started the meetings here, and is the First Reader. For twenty-four years the meeting night of the Arthur-Guinevere Lodge, Knights of Pythias, was Wednesday, but in order to let the hall to the Christian Science society the lodge decided to meet Friday night. 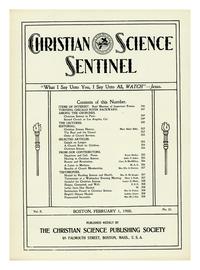