Ten years ago a friend wrote inviting my sister and myself to enter a Christian Science class. I considered myself too sensible to throw away fifty dollars on such nonsense.

The summer of 1894 was spent in Bay View with the hope of recuperating an invalid mother. While there I met a young man who seemed to enjoy good health. A chance remark led me to say, "You must be a Christian Scientist." He related his healing from typhoid fever, and said that if he were taken ill he would telegraph to his mother for treatment. The only impression I had was that he was very much deluded to believe in such foolishness. 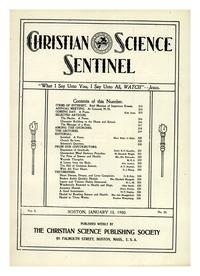