"The infinite idea forever developing itself"

When we think deeply about God as infinite Life, we see that Life must forever unfold spontaneously its own measureless resources. It must express itself. That's the very nature, necessity, and essence of Life.

When we think deeply of God as infinite Mind, we see that this Mind is eternally manifesting itself in the limitless idea that reflects it, is forever unfolding its own inexhaustible capacities and intelligence. Such is the nature and activity of Mind.

Thus it becomes clear that Life, Mind, is forever developing its own manifestation—unfolding, expressing its own nature in its immeasurable idea. The Discoverer and Founder of Christian Science, Mary Baker Eddy, draws a logical conclusion from this absolute basis when she writes: "The true theory of the universe, including man, is not in material history but in spiritual development. Inspired thought relinquishes a material, sensual, and mortal theory of the universe, and adopts the spiritual and immortal." Science and Health with Key to the Scriptures, p. 547.

She further describes God's ever-unfolding self-expression this way: "God expresses in man the infinite idea forever developing itself, broadening and rising higher and higher from a boundless basis. Mind manifests all that exists in the infinitude of Truth." Ibid., p. 258.

The meaning of these statements becomes clear in divine Science, because this Science expresses and explains the divine Principle, God, including His infinite idea, man. This Science not only comprises the laws of Life, Truth, Love, Mind; it also includes their development, operation, and meaning. In its practical application to humanity this Science, Christian Science, shows how an understanding of spiritual development brings answers to human needs.

For example, mortals often fear that some disease is developing in the body. Yet the truth of man's real being is that he is not a fleshly organism subject to matter but is divine Mind's conscious spiritual reflection forever unfolding the immortal nature of Life, Mind, Love. This is the only development going on in man. Therefore no disease develops in man. The Christianly scientific understanding of this truth acts as law to preserve one's immunity from disease. Innumerable instances have proved that this truth, when understood in scientific prayer, acts to reverse the development of disease and bring healing.

All suggestions of fear and disease must go down before the unfolding consciousness of divine Love's saving presence. These are ruled out by the understanding that under God's government disease has no origin, no foundation, no law to support it, no course to run, no power to perpetuate itself, and no place in man as Mind's idea. Because the development of God's laws and of His life-giving qualities constitutes the totality of man's real being, there can be no runaway disease in man—no deterioration of his substance (which is the substance of Spirit) and no accumulation of disease-elements within him. The fact is that no disease, curable or supposedly incurable, has any reality or any foothold in man's body, or anything to sustain it there, because man's body is not material—it is the conscious reflection of Spirit. Man is the conscious, ever-unfolding spiritual individuality formed by Mind.

The Bible attributes to God the promise, "I will put my law in their inward parts, and write it in their hearts." Jer. 31:33. In line with this Mrs. Eddy writes, "Man has perpetual individuality; and God's laws, and their intelligent and harmonious action, constitute his individuality in the Science of Soul." No and Yes, p. 11.

Actually there are no other laws in man, no material laws producing or sustaining any disease-process. Under God's government there is no such process in man. This is demonstrable truth when the "intelligent and harmonious action" of God's laws is understood. These laws of Life and harmony alone govern the entire functioning of man's being. These intelligent laws of Life and Love obliterate any supposed evidence of disease; they bring to light the unbroken harmony of man that already exists in Truth. Such are the truths of man's being. When understood in Science, they act as a law of recovery, restoration, purification, and well-being to us.

Mortals fear that with passage of time they will decline into inactivity and run down like a clock. Yet an understanding of the developing energies of Spirit, and of the ever-unfolding resources of Life expressed in strength and spiritual activity, has often lifted individuals out of decrepitude or preserved them from it.

One of the human beliefs to be met with Truth is that the development of disease or decrepitude can go on untouched by prayer. But Christ, Truth, is the healer through the operation of immutable Science, the law of God. When the action of all-powerful Truth is understood in its Science, it is irresistible. It deeply changes human thought and experience. It effectually wipes out every vestige of physical discord. No immature human understanding of Truth can hide the ever-unfolding truth of man's wholeness, perfection, and well-being already established in Mind; and the Science of Christ, which is the Comforter promised by our Saviour, Christ Jesus, is progressively bringing this truth of man's spiritual being to light in human consciousness.

Our Leader, Mrs. Eddy, tells us that "a knowledge of the Science of being develops the latent abilities and possibilities of man." Science and Health, p. 128. This great truth not only points toward the God-given capacity we all can demonstrate, through spiritual understanding, to heal the sick by spiritual means alone. It also opens up to us new dimensions in the recognition and realization of our true identity as God's man. It progressively wakens us to our real individuality, unconfined by matter or material history but ever unfolding, ever developing, as the image and reflection of the infinite Mind, Life, Love. 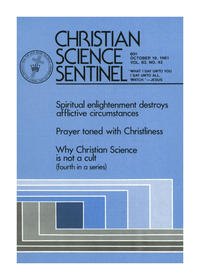