How I’m praying about school shootings

Another school shooting. I was working on my homework when the notification popped up on my computer. While I was upset, this news was no surprise; these attacks had taken place regularly in the United States throughout my childhood, and I was almost desensitized to the violence. However, this particular tragedy suddenly became a frightening reality when I learned that some of my classmates had known one of the victims. In the months that followed, I started to feel paranoid and powerless, and this fear only escalated when the news broke that there had been yet another school shooting elsewhere in the country.

A few weeks later, I was attending a testimony meeting at my local branch Church of Christ, Scientist, when a woman shared something that really helped me. This woman’s dog had been poisoned by a neighbor, and though the woman prayed diligently for the dog for several days, the situation soon seemed hopeless—like the dog was going to pass away.

She sent her young daughter to say goodbye, only to be shocked when, moments later, the girl trotted back happily with the dog—who had been completely healed. When the woman asked her daughter what had happened, the girl explained that she had prayed for the neighbor, not the dog.

While this might seem like an unusual thing to do, it does go along with Jesus’ instruction to “love your enemies, bless those who curse you” (Matthew 5:44, New King James Version). Love like this doesn’t overlook the perpetrator’s actions, but Jesus proved that this kind of love is so powerful that it can help the perpetrator repent and change. And, in the case of the woman at my church, this love was so pure that it also blessed her and her family.

This idea of praying for the perpetrator resonated with me, and I was eager to apply it to my fear of school shootings. Rather than wait helplessly for the next report of violence, I proactively prayed to see potential shooters differently—as truly made in the image and likeness of God, as it says in the Bible. As I’ve learned in the Christian Science Sunday School, God is good, so His image and likeness must be good; God is Love, so we are actually all made to express love. I knew that seeing would-be perpetrators this way could help bring out more of their inherent spiritual goodness and love, and override evil impulses.

In the book of Jeremiah I found this passage: “I will give them an heart to know me, that I am the Lord: and they shall be my people, and I will be their God” (24:7). I felt more secure as I realized that we all have an unbreakable relation to God, and that this means we all know and respond to Love. God doesn’t see anyone as a would-be shooter; He loves us all as His people, and we can each feel this love in a way that dissolves darkness, hatred, or imbalance. For the first time, I felt compassion for potential perpetrators, and as this new perspective helped me see them through a spiritual lens, my fear lessened, and I no longer felt like a powerless bystander.

Praying to know that potential perpetrators are innately drawn to love rather than violence enables me to feel empowered rather than helpless.

But the blessing didn’t stop there. I’m also grateful to say that I’ve since been able to apply these insights to a number of situations, such as praying to love bullies—or anyone who seems to have bad intentions—as God’s pure children. And I’m learning more about the power of God’s love every day.

I continue to pray to know that God is present to comfort the people affected by school shootings. And I am discovering that praying to know that potential perpetrators are innately drawn to love rather than violence enables me to feel empowered rather than helpless, and that instead of expecting tragedies, I can participate in actively praying to prevent them. 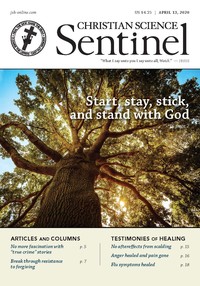