Updated version of an article in The Christian Science Monitor, August 31, 2017, adapted from an editorial in the September 13, 1993, issue of the Sentinel.

In the wake of recent massive storms and flooding in the southern United States, the Caribbean, West Africa, South Asia, and many parts of Europe, the term acts of God might be coming to many minds. The term is commonly used in the insurance industry and in news reports about natural disasters. It even appears in governmental policies and procedures. Anything that wreaks destruction through forces of nature, such as earthquakes, hurricanes, or floods, may be characterized as “an act of God.”

Although many may accept the term as simply a convenient means of designating certain types of disasters for the purposes of insurance or legal claims, there’s little question that others see such havoc as quite literally God’s hand at work, punishing His wayward children. For example, in the wake of terrible floods that took place in the Midwestern United States some time ago, a media poll found that 18 percent of Americans believed the destruction was a form of divine retribution, or “God’s judgment on the people of the United States for their sinful ways.” In citing this poll, USA Today (July 23–25, 1993) quoted one of the individuals surveyed, who felt there were parallels between the recent floods and Bible stories. She concluded, “When the people became godless and corrupt, their land and civilization were destroyed.” 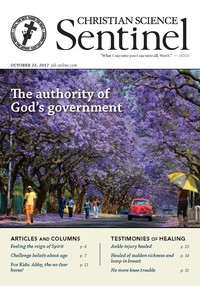