Healing in a family relationship

Several years ago, when my son told us he was going to marry his girlfriend, my husband and I were delighted. They appeared well suited to each other. They cared for each other in unselfish ways. Her family clearly loved my son as much as we loved their daughter. Having raised two sons, I was looking forward to having a girl in the family.

I thought it was a good sign when this young woman included me in wedding preparations. The wedding was a joyful time. However, there was often a distance between us. She was sometimes defensive toward me. Something was not right, but confronting her about this felt risky. 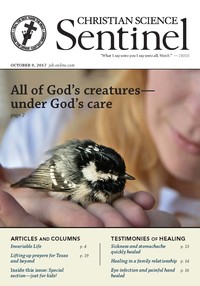