Originally written in Spanish, this testimony first appeared in the June 2014 Spanish, Portuguese, French, and German editions of The Herald of Christian Science.

I began studying Christian Science over 25 years ago. At that time I was raising my four-year-old son on my own and dealing with some physical challenges.

I’d been suffering from migraines for several years, an ailment that I supposedly had inherited from members of my family, as well as from a frequent sore throat, a condition my mother often had. 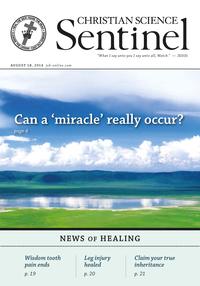