On the hills today in Morocco, Israel, and throughout the region, you can see goats and sheep running about in combined flocks, looking for grasses to eat. They are not quite as abundant as they were in biblical times, but they remind us why the shepherd/flocks/sheep metaphors are so prevalent in the Bible, and especially in this week’s Bible Lesson, titled “Everlasting Punishment.” Biblical “flocks” are often combined flocks of goats and sheep. Goats know where they are going and sheep are happy to follow them, but the shepherd is needed to protect them when animal predators approach.

When David was a shepherd, he fought off bears and lions (see I Samuel 17:34–37). Later God set up David as a shepherd over the people of Israel (see Ezekiel 34:23, 24, Responsive Reading). These jobs wouldn’t be easy for a human working alone, but it’s God’s responsibility to protect the sheep—His people, including us.

Abigail Fuller has a master's in physics, and is working on her master's of divinity at San Francisco Theological Seminary. She lives in San Anselmo, California. 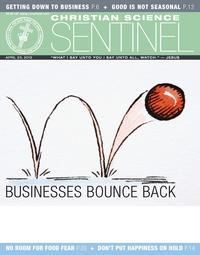