The world has seen many moves from dictatorship toward democracy in recent decades. Think, for example, of Corazon Aquino’s 1986 “People Power Revolution” in the Philippines, which toppled the country’s dictatorship. Or the collapse of the Iron Curtain just five years later. It’s not hard to imagine that the ongoing prayers for peace that millions of people have offered have had something to do with this shift to freer, more open societies. The Mother Church has been at the forefront of these prayers, with broadcasts, articles, and lectures on how the world can find peace.

The ferment, of course, is still bubbling in many places—the complicated post-“Arab Spring” climate in much of the Middle East comes to mind—and millions of people are still under unjust rule, but the world’s prayers are having their effect. And here is where Christian Science can be most helpful, for it shows us how to pray by tapping in to the laws of God, the laws by which Jesus did his marvelous works and by which we can get consistent results. 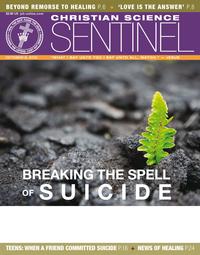