Prayer for my son in the military

When his son decides to join the National Guard, this father discovers a whole new dimension of caring for one’s child.

I was surprised and quite alarmed when my son, Matt, announced that he was joining the Vermont National Guard, as he was past the typical age of enlistment. There were some sound reasons for his decision, including his laudable interest in serving his country. I respected his decision and applauded him for wanting to serve, but I was not happy. As can be imagined, many negative and sometimes fearful thoughts raced around in my mind.

I’d served in the Navy during the Vietnam war and fervently hoped that my children would never be put in that kind of situation. My experience had been relatively uneventful, but I knew things did not always go smoothly in times of war.

Michael Hefner owns a small business and lives in Vermont, where he enjoys the great outdoors.&nbsp; 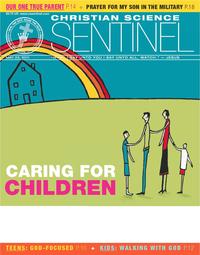